In between rehearsals at the Gerald R. Ford Amphitheater, Kirsten Evans sat down for a chat with American Ballet Theatre (ABT) Principal Isabella Boylston.

On the grassy lawn seating that will fill with eager patrons later this evening, this busy ballerina filled me in on life in New York, her experience with the Vail Dance Festival and what’s up next.

Kirsten: You’re originally from Sun Valley, Idaho. How long have you been living in New York?

K: So do you feel like you’re a New Yorker now?

I: Oh fully, yeah. Definitely a New Yorker. Although I also grew up in Colorado, so I miss nature and trees…

K: And this is not your first time in Vail, right?

I: No, I’ve been at the Vail Dance Festival for the past 5 summers, and last year I was actually the Artist In Residence.

K: Very cool. What comes along with being Artist In Residence?

I: Honestly, just a lot of performing. [laughs]

At this point my eyes widen and I shoot her my crazy-person-face.

K: Even more performing than you’re doing here this year?

Isabella laughs and nods like she can’t believe it either.

I: Yes, even more performing. It’s an honor to be featured in that way.

K: Definitely. What are you performing at this year’s Vail Dance Festival?

I: I’m doing [August Bournonville’s] Flower Festival with Jeff [Cirio] and [Christopher Wheeldon’s] This Bitter Earth pas with Calvin [Royal]. Bitter Earth is a pretty poignant piece. I like to think of it as a reflective piece almost looking back on past events that were difficult for me, maybe challenges in love, that kind of thing. Every time I do it, it feels a little different just based on where I am in life. We’ve always been lucky enough to perform it with Kate Davis singing live, which totally enhances the mood. She has this crystal clear, transcendent voice and it always feels very emotive to do it with her.

K: So inspiring. And how has it been working with Jeff and Calvin?

I: Oh, just great. I know them both so well, we are all close friends. Calvin and I had never danced together until Vail last year when we did Bitter Earth for the first time; Jeff and I just did La Fille together last season.

K: So besides the homey feeling you get coming back to Colorado, what excites you about the Vail Dance Festival?

I: I definitely think one of the highlights is getting coached by Heather [Watts] and Damian [Woetzel]. They are so nurturing and I always leave with a lot of fresh ideas. And of course it’s super inspiring to be around all of these insanely talented dancers. It kind of feels like a family because a lot of us return year after year, so it’s like a little reunion.

K: Aw! That’s really sweet. So what’s up next for you this summer?

I: Oh! I’m actually putting on my own little festival in my hometown, Sun Valley, Idaho. There’s a beautiful amphitheater there, and I have been really inspired by everything Damian has done here in Vail. I mean, it’s much smaller scale, it’s just two performances…

I: You’ve gotta start somewhere. I have incredible dancers coming, a lot of them from here actually. I just picked pieces that I really like and we have a lot of live music, too. Then we’re also doing a free education day, enrolling up to 200 kids in free dance classes, which is really fun.

K: I love that! Bringing affordable dance education to kids is so important.

I: So important. I mean, I wouldn’t be here without scholarships.

K: It’s also a great way to open people up to ballet in a new way, especially those who might not think ballet is accessible to them.

I: Yeah! Exactly. So in between Vail and my festival in Idaho, I’ll be traveling to Argentina to do a couple of guestings there.

I pause. Another wide-eyed look.

K: When do you get time off?

I: After my show in Sun Valley I’ll have a week off before starting back at ABT in September. It’s whirlwind summer.

K: Sounds like it! Hopefully you have a little time to relax while you’re here?

I: A little, yeah. Barton [Cowperthwaite] and I hiked the Booth Falls Trail a few days ago, it was so beautiful. But it was also a workout! 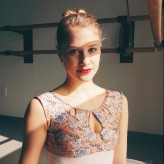 Take a dance class with a professional from your home!