Were there techno DJs at the Bauhaus’s famous parties? No of course not. But BAUHAUSCLUB 2.019: Hyper.Culture wasn’t meant to be historically accurate reconstruction of a 1920s Bauhaus festival. Instead, the evening of electronic music and cutting-edge dance and performance art sought to reimagine the rebellious, innovative spirit of the Bauhaus for the 21st century, giving audiences a sense of how weird, wacky and avant-garde the movement was before it became the renowned staple of art history it is today.

Whilst DJs and electronic music were a main focus of the night, with names such as Aisha Devi and Mykki Blanco (who stopped halfway through his set professing he didn’t perform to white people just sitting down) attempting to transform Berlin’s Akademie der Künste into a Berghain worthy club night, Hyper.Culture also boasted two contemporary dance offerings. The first was from one of the biggest names in the business, Trajal Harrell, the renowned American choreographer most famous for exploring the connection between voguing with post-modernist dance for his piece Twenty Looks or Paris is Burning at the Judson Church. Chosen for the Bauhaus club due to a perceived parallel to Oskar Schlemmer’s concept of the kunstfigur (as I was told by festival curator Bettina Wagner-Bergelt in an interview for MutualArt), Harrell showcased his performative exhibition Hoochie Koochie for the first time in Germany, treating his Berlin audience to a rotation of performance excerpts from different stages in career.

Presented like an art exhibition rather than a traditional performance, with programme notes taped to the walls like exhibition labels, Hoochie Koochie was a highly innovative addition to the evening. When I first walked into the empty room, only populated by a slide show of Nan Goldin- esque photographs of New York’s contemporary dance scene, I did slightly worry I’d missed the part of Hyper.Culture I was most excited to see. My fears were averted however when two sassy male performers burst out into space, disturbing the silence, strutting and parading across the performance space and out into the foyer and stairs, confrontationally making their way through the crowded audience to the arresting beat of Let’s Get Sick by electro punk group Mu. This bold, attitude-packed intervention was followed by highly contrasting pieces which evidenced the diversity of Harrell’s oeuvre, from Showpony Begins which saw one performer break all notions of a fourth wall by systematically sitting on each of the audience member’s laps, to The Untitled Still Life Collection II, which featured a series of duets and solos where the performers experimented with string as a prop, with one couple even being connected mouth to mouth, chewing their way along the cotton closer to each other until they were almost kissing. Creon’s Solo, which saw an almost nude male dancer covered only by intricately knotted silk scarves, was one of the highlights of the night, as the audience observed graceful, fluid, and often minimal movements performed to a range of seamlessly blended musical styles.

The second dance instalment of the night was from the South African performance duo FAKA, who emerged suddenly in the centre of the Akademie der Künste’s crowded Clubraum after a rhythmic set from fellow South African DJ Bigger. Sensually crawling their way to a designated performance space, entangled in a rope conjuring the connotation of imprisonment, FAKA created intricate, intertwining forms with their oppressive prop. Upon finally unravelling themselves, the duo made their way up onto wooden boxes/pedestals, where they impressively balanced whilst performing mesmeric, liquid arm gestures and deep grand pliés. All of their choreography was accompanied by intense, penetrating, almost possessed gazes, otherising the dancers as in-human in a manner that also mirrored Schlemmer’s principle of the kunstfigur – a modified/ transformed human for the purposes of art and performance.

Who would have thought a South African performance art duet in a club environment would have anything to do with a century’s old German art movement? Not me at least. But when FAKA’s (and Harrell’s) work was presented in the context of Bauhaus as part of Hyper.Culture, the links were undeniable, as was the relevance of Bauhaus in the 21st Century. 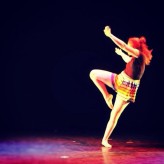